I'm rendering some UI using an immediate-mode UI library, so each frame it produces some meshes, which I then load into buffers and render, only to get some strange errors from Renderdoc:

You can see in the API inspector the list of calls preceding the draw.

I'm deeply puzzled by this, because of the following facts:

This problem only happens when the UI library returns more than one mesh. That is, the API calls for multiple meshes would go as follows:

If I call glVertexArrayVertexBuffer even once per frame, the errors are not reported, regardless of how many meshes the UI returns. First mesh draw:

Why I find this strange:

I see 2 possibilities - 1) I am using the API incorrectly, and 2) there's a bug in RenderDoc.

Would really appreciate if someone could shed some light onto this issue.

"including the call to glVertexArrayVertexBuffer" Are you sure about that?

I have captured Frame #0 and Frame #1815 in Renderdoc to illustrate that the call is made (see the image below) and noticed that in the second frame no errors were reported! It strongly suggests that if Frame #0 is not captured, then Renderdoc just doesn't know that the appropriate calls have been made and reports false errors.

Also quite expectedly, if I remove the call to glVertexArrayVertexBuffer, then nothing gets drawn and OpenGL complains. I almost think we've solved the mystery. 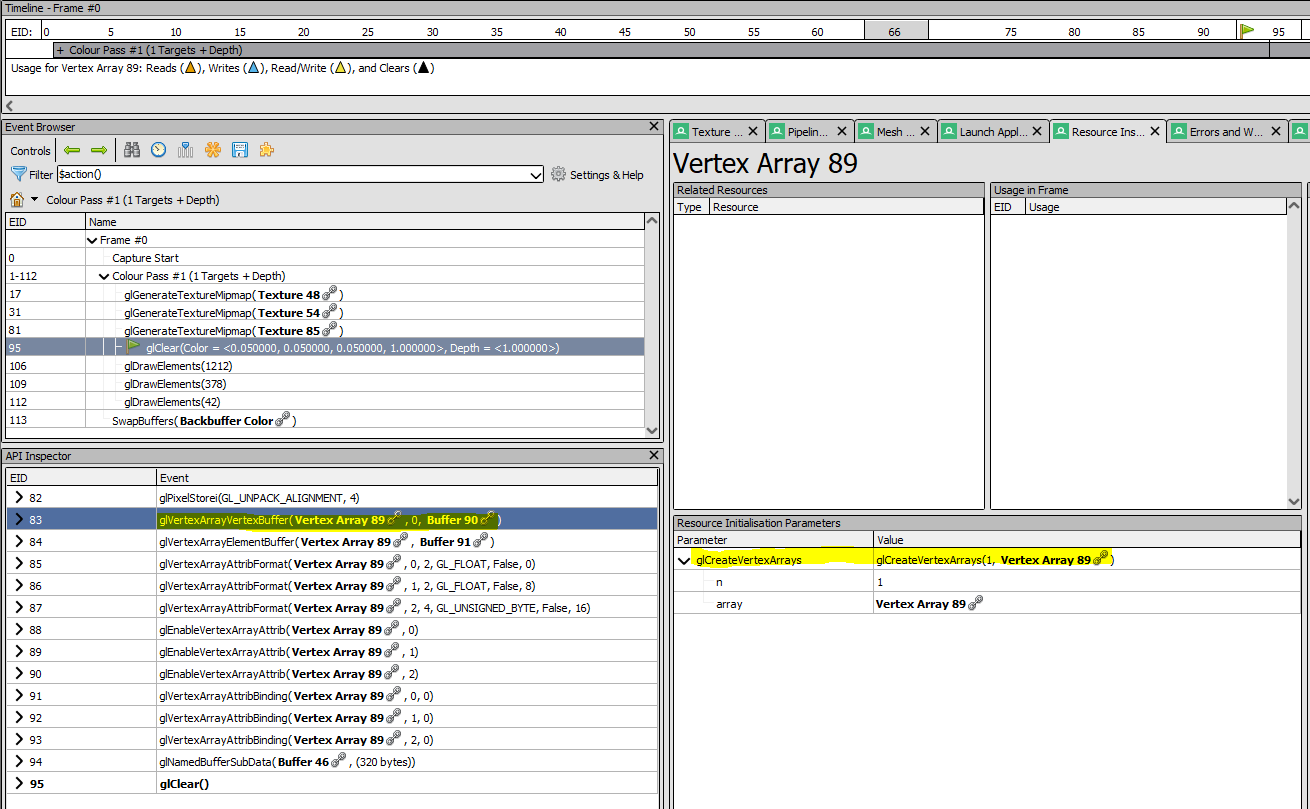 As per Nicol Bolas's suggestion I have rewritten the code so that all the meshes are packed into one vertex buffer and are loaded there once per frame. After this change Renderdoc stopped complaining. I mostly consider the issue solved, but one thing is still not clear:

If the assumption that Renderdoc needed Frame #0 to "know" about the call to glVertexArrayVertexBuffer is correct, then why did it not complain when there was only 1 mesh to draw (i.e. there were no multiple draw calls with glNamedBufferData between them).

If no one knows for sure why this is happening, I will probably raise an issue with Renderdoc and mark this question as done.

Browse other questions tagged opengl or ask your own question.

5
OpenGL Instanced Rendering with Level of Detail
4
Compute shader not updating buffer, or vertex buffer unable to read the updates
1
Can you batch vertex data and still sort by depth?
3
glClear's result can't be seen when using bindless texture
3
Most efficient way to render many OO meshes in OpenGL
4
Why is OpenGL recompiling my depth map vertex shader based on the GL state?
2
Strange VSync issues on a GTX 1060
1
Understanding VAO and VBO
1
is doing transform feedback while rendering vertices not possible?