OpenGL transparency - object behind is not rendered

I'm trying to implement voxel world using OpenGL (Core 3.3). I've come across a problem with transparency. It looks like sometimes GPU decides to not render stuff that would be important. Can you help me diagnose the problem, please? (I thought this problem can be related to sorting (I don't perform any extra sorting at the moment), but I've changed "clear color" to glClearColor(1.0f, 1.0f, 1.0f, 0.01f); and the "gaps" are still noticeable)

EDIT: I've found a resource that claims that it is indeed sorting problem and drawing background triangles at first should solve this issue. However every 'chunk' (16x16 blocks' column) is rendered as a separate batch with single draw call. Is there a way to preserve this batch rendering?

Here are some pictures: 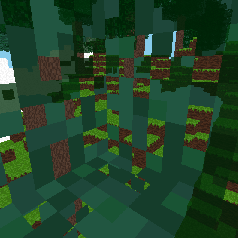 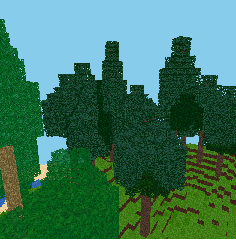 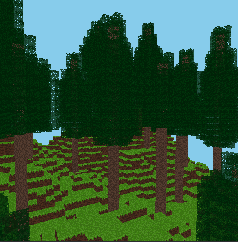 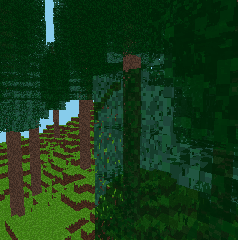 The Ftagment Shader is very simple:

Do you have any idea how can I fix this problem?

1:First render all opaque geometries. and then render the transparent.

Here you create a list of fragments (pixels) for each pixel on your screen. The list of fragments must hold the depth and color value. when all geometry is rendered, you can iterate through each list and sort the fragments by the depth value and render them again from back to front. This will give you a very good final image.

I can't actually spot the problem from your pictures, but the problem you describe is a very common one for new developers trying to implement transparency, so I'll assume it's there.

If you only have fully opaque and fully transparent pixels, a really easy solution is to enable alpha test. Pixels with 0 alpha will be fully discarded and won't update the depth buffer. Pixels with 1.0 alpha will act as opaque.

If you have partially translucent pixels, then you have two options: either actually render front-to-back or implement one of the schemes of order-independent transparency. All of these options have significant tradeoffs. Fortunately, you appear to have only fully transparent pixels, so it is not necessary to delve into either.

Not the answer you're looking for? Browse other questions tagged opengl 3d fragment-shader transparency z-buffer or ask your own question.

17
How can I debug what is being rendered to a Frame Buffer Object in OpenGL?
15
What are some methods to render transparency in OpenGL
7
Additive blending with weighted-blended order independent transparency
4
Strange behaviour in vertex shader with divisions
1
Why is this not a proper solution to handling transparency in deferred rendering?
5
Blur with alpha transparency
1
OpenGL in CodeBlocks with GNU GCC compiler not recognising some constants