What are some methods to render transparency in OpenGL

Alpha blending can be turned on to make surfaces transparent, like so:

But this only works if objects are rendered in back to front order. Otherwise things in the background appear in front of closer objects, like the floor in the image below. For particles and GUI elements sorting would be OK, but for triangle meshes it seems like it'd be too much effort and slow, as discussed here: https://www.opengl.org/wiki/Transparency_Sorting.

What are the common methods to deal with this? I know this is quite broad and am not after in-depth implementation details, just a brief description of some approaches and what might be involved. 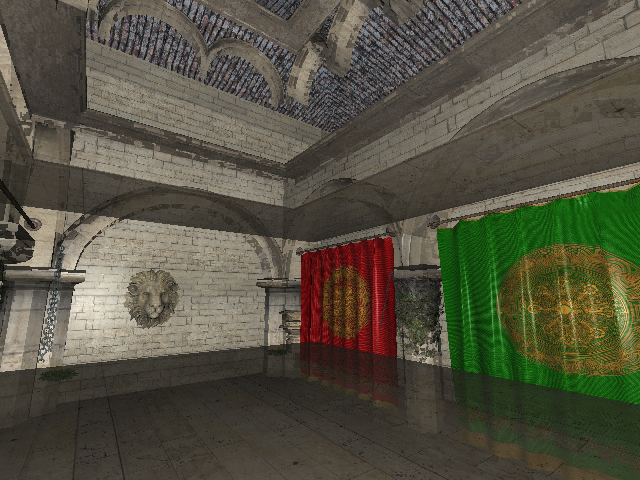 A set of techniques to avoid explicit ordering go under the name of Order Independent Transparency (OIT for short).

There are lots of OIT techniques.

Historically one is Depth Peeling. In this approach you first render the front-most fragments/pixels, then you find the closest to the one found in the previous step and so forth, going on with as many "layer" as you need. It is called depth peeling because at each pass you "peel" one layer of depth. All your layer can be then normally recombined from back to front. To implement this algorithm you need to have a copy of the depth buffer.

Another set of techniques are the blendend OIT ones. One the most recent and interesting one is the Weighted Blended OIT proposed by McGuire and Bavoil. It basically apply a weighted sum for all the surfaces that occupies a given a fragment. The weighting scheme they propose is based on camera-space Z (as an approximation to occlusion) and opacity.
The idea is that if you can reduce the problem to a weighted sum, you don't really care about ordering.

Other than the original paper, a great resource for implementation details and problems of Weighted Blended OIT is in Matt Pettineo's blog. As you can read from his post this technique is not a silver bullet. The main problem is that the weighting scheme is central and it needs to be tuned according to your scene/content. From his experiments, whilst the technique seems to work fine for relatively low and medium opacity, it is failing when opacity approaches 1 and so could not be used from materials where big part of the surface is opaque (he makes the example of foliage).

Again, all come down to how you tune your depth-weights and finding the ones that fit perfectly your use-cases is not necessarily trivial.

As for what is needed to for the Weighted Blended OIT, nothing more than two extra render targets. One that you fill with the premultiplied alpha color ( color * alpha) and alpha, both weighted accordingly. The other one for the weights only.

One option is to use depth peeling.

Essentially, one processes the scene a set number of times (say, n times) in order to determine the closest, second-closest, all the way to nth-closest fragments of the scene.

This processing is done by first applying a regular depth test to the entire scene (which naturally returns the closest surface). One then uses the result of the depth test to filter out the first layer, by ignoring everything with a lesser depth than returned in the depth test.

Applying the depth test again will then return the second layer. Repeat as needed.

Once you have the layers, you can just draw all the layers in reverse order (assuming you kept track of the RGBA colors for each layer), blending normally, since the layers are in front-to-back order.

The creme de la creme of single-pass no (or few) compromises transparency in OpenGL is an A-buffer. With modern OpenGL, it is possible to implement:

It avoids the multiple passes of depth peeling and doesn't require onerous sorting.

Not the answer you're looking for? Browse other questions tagged opengl rendering transparency or ask your own question.

4
SVG opengl implementation - strokes overlap on transparency
7
What methods/technologies to reduce required performance for virtual reality are there?
1
How are Physically Based Rendering Methods Researched?
1
LWJGL/OpenGL render textured quad
2
What are the use cases for multiple render passes?
1
OpenGL transparency - object behind is not rendered
0
How to render fog in OpenGL