What is slope distribution

I was reading this slope space integral paper. Can anyone help to explain slope space and slope distribution mentioned in this paper, and why we can use normal and half vector to represent 2D positions in slope space? Thanks!

If we have a vector in the upper hemisphere in tangent space, $(x, y, z)$ with $z > 0$, then the slopes of the vector are $(\tilde x, \tilde y) = (-x/z, -y/z)$. These values are the slopes (derivatives), along $x$ and $y$, of a surface that is normal to the given vector. See also equation (4) in the paper, which is the conversion back and forth between slopes and vectors.

The 2D space of slope values is called "slope space". It is an unbounded space, so any $(\tilde x, \tilde y)$ point represents a valid vector in tangent space (such as a microfacet normal). Geometrically, you can picture it like the intersection of the vector with the $z = 1$ plane. It produces an invertible, one-to-one mapping (bijection) between the upper hemisphere and the plane. 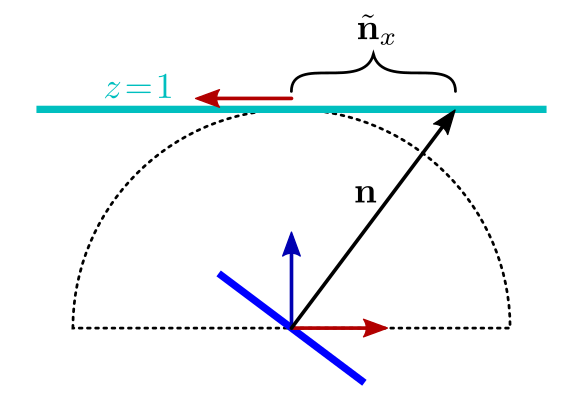 Edit: I wrote a more in-depth blog post on this topic in case more explanation is needed.

6
BRDF and Spherical coordinate in ray tracing
10
Correct form of the GGX geometry term
11
In a physically based BRDF, what vector should be used to compute the Fresnel coefficient?
2
Real time image based lighting for arbitrary BRDFs coordinate alignment
2
Troubleshoot half vector sampling from a distribution (cook-torrence, trowbridge-reitz, etc)
7
Anisotropic GGX BRDF implementation. How is it related to isotropic GGX BRDF?
3
Implementing the example of Walter et al. (2007) paper
0
Understanding of Microfacet monte-carlo path tracing
0
PDF of BRDF respecting the spherical coordinates