Then I have read this article on random vector generation

Here are what I feel are the important bits. 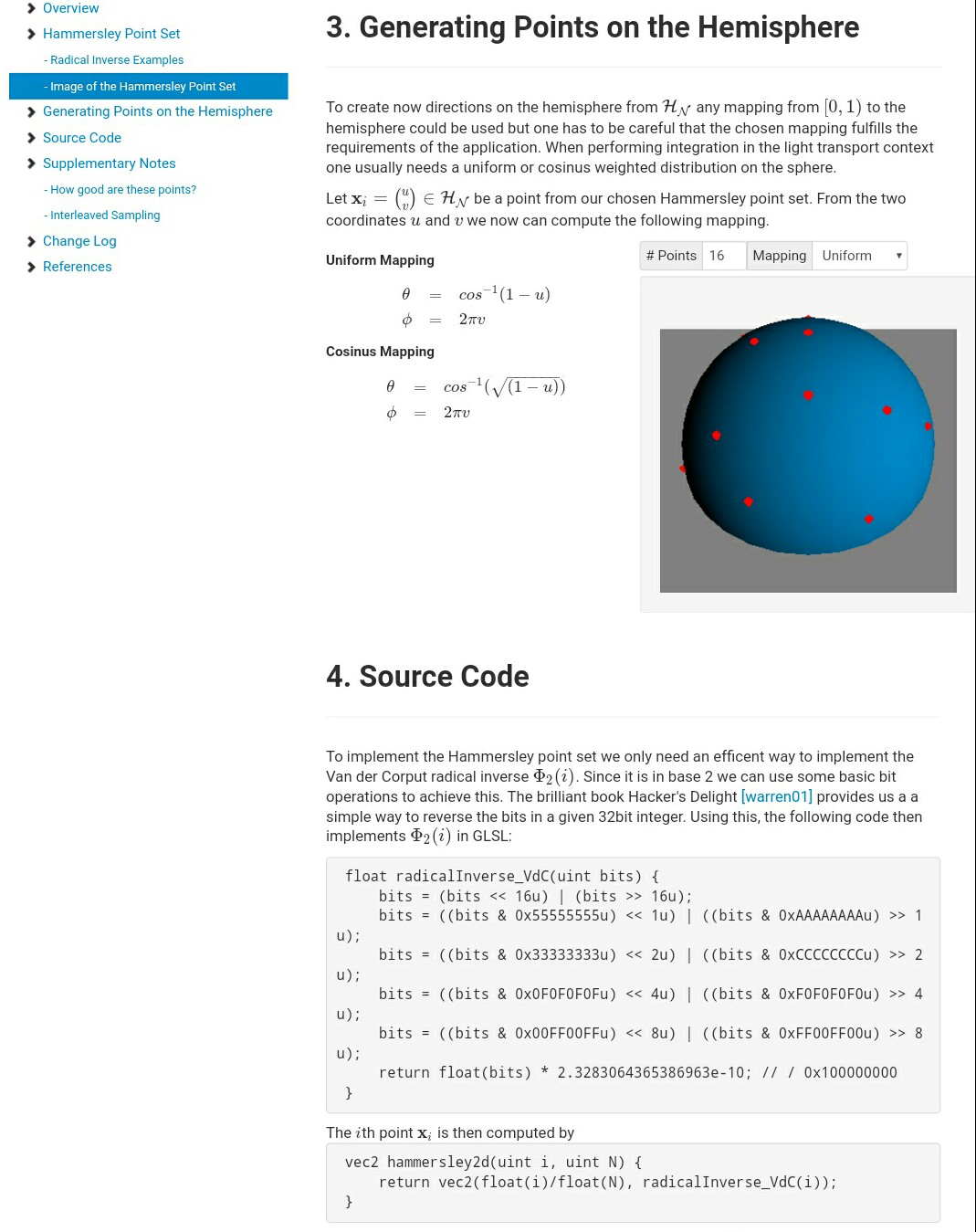 Now jump to Importance sampling here is the function 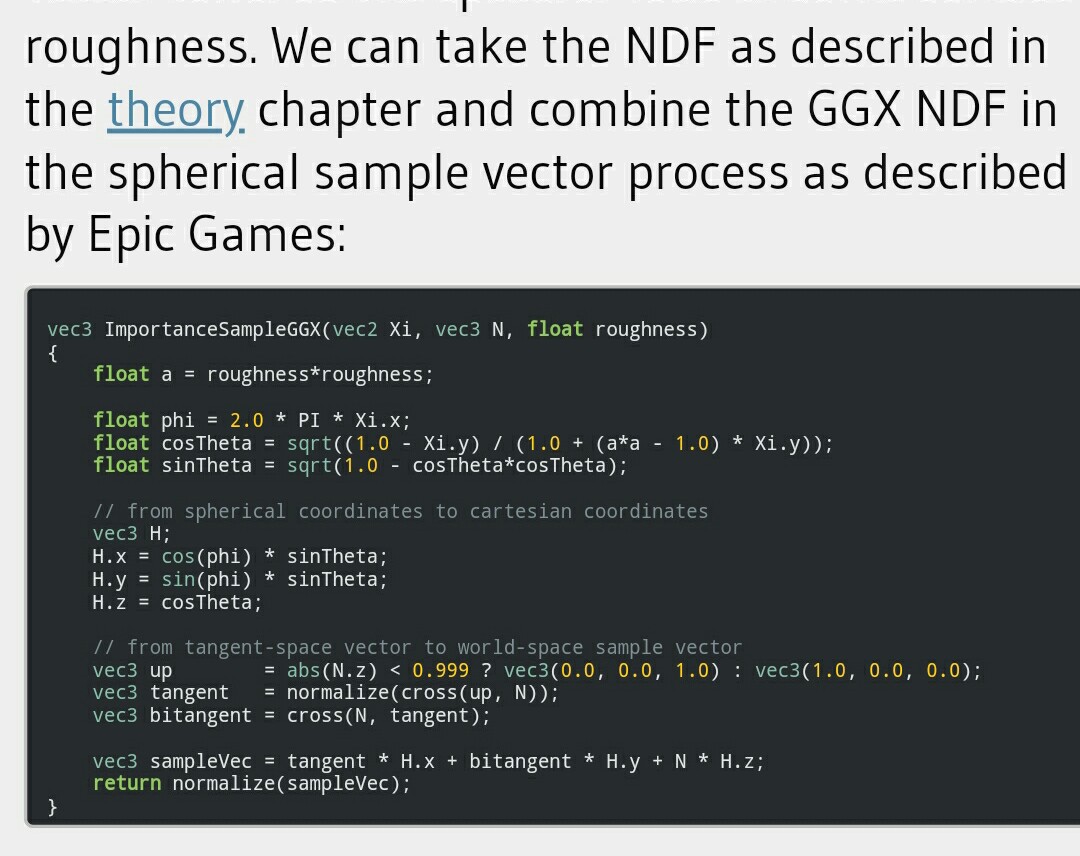 Xi is the random vector returned from Hammersley function.

Notice how I have left the theory on top of the function. He clearly says "We combine the NDF with the Hammersley equation in spherical space"

This is my question. How did he do that? I have read the epic games real shading pdf and they don't provide any explanation whatsoever 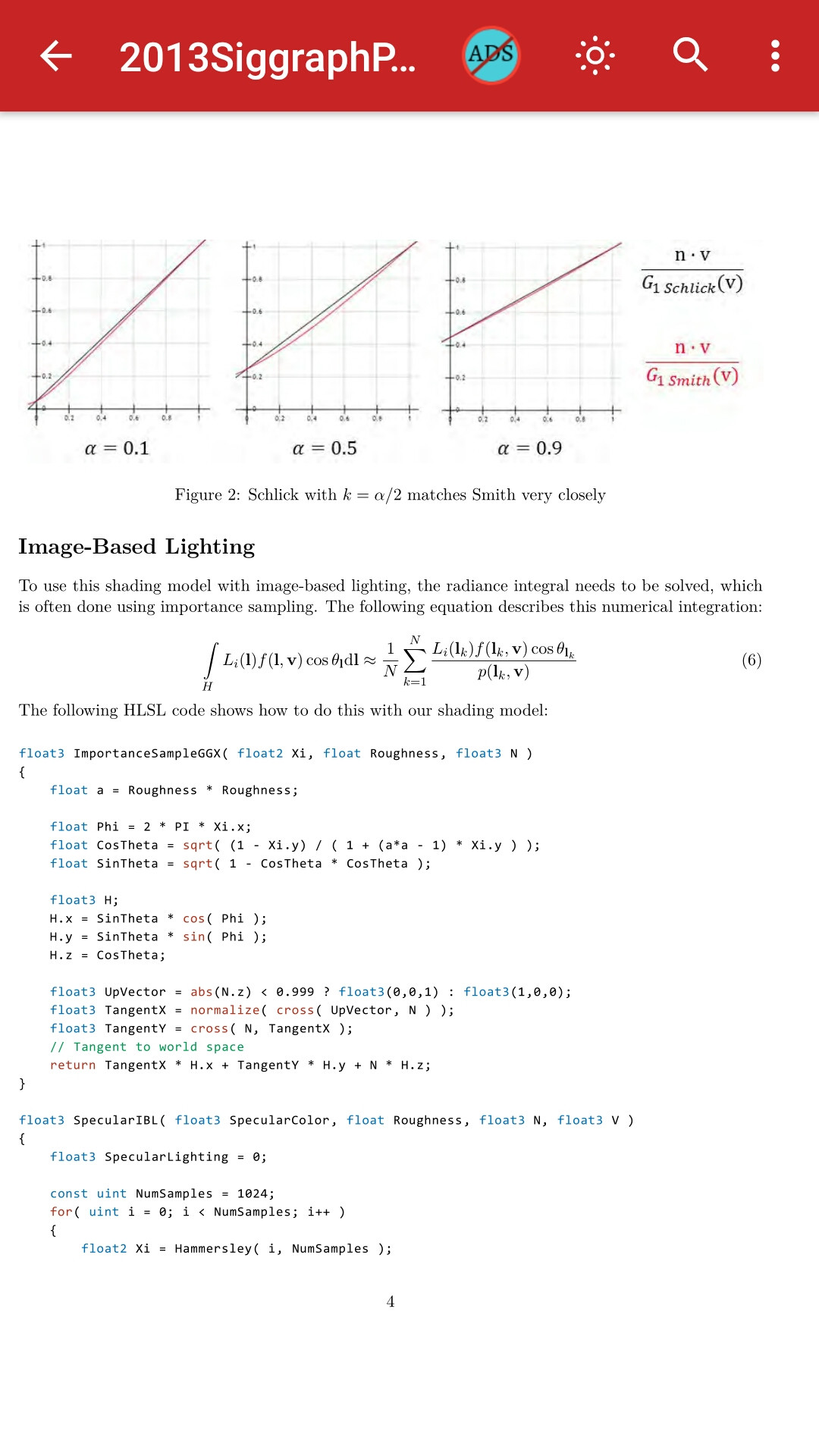 All I need to understand is how did they derive the cosTheta and sinTheta terms.

Any explanation even a one liner as an comment would be immensely appreciated.

Leaving the actual derivation of mathematics aside, I'll try to give a general description of how can we combine the NDF with importance sampling in spherical coordinates.

The problem is the following. Intiutively, we need the NDF for "zooming in" from the realm of macrosurfaces to that of microfacets.

Mathematically it is needed for the following equivalence:

You can read this equivalence as the following: One can approximate a solid angle subtended by a flat surface whose area equals $dS$, orientation $\hat{n}$, and distance from the viewer $r$ where $\hat{r} = \frac{\vec{r}}{r}$ and $A = 4\pi r^2$. The $\vec{r}$ is a position vector of the surface area $dS$ with respect to the center of the sphere. You can read more about it in wikipedia

The point here is that whenever we consider approximating solid angles with projected surfaces, we need that direction and distance term. Whether we consider solid angles over microfacets or macrosurfaces don't make a difference. From this perspective, you can think of $NDF$ as "regulation" term for two different granularities involved in approximating the same structure.

Since we are modeling the same structure from two different granularities, we can't "touch" properties that coincides with physical/geometric properties of the structure, but we can "touch" the regulation term, hence different ways of computing ndf are provided by different researchers.

What is Importance Sampling ?

Here is the second bit of information necessary to understand the procedure. Let X be a random variable, ie a function whose signature is $X: M \to R $, where $M$ is the sample space and $R$ is the set of real numbers. Expected value $E[X]$ is given under the probability distribution $P$ as the following $E[X;P] = \frac{1}{n} \sum_{i=1}^n x_i$ where n is the total number of samples drawn from the distribution and $x_i$ is sample generated from $X$ using the distribution P.

Now think of the following, we have some random variable X, that outputs values according to some distribution, and we want to understand how X works under that distribution. Wouldn't it be better to select the input values for X so that the graph made by the output values look more like the actual graph of the X under distribution P. This is what we are trying to do with importance sampling. The key here is to understand that though we may not know how X maps values in its domain to its codomain, we may know how the probability distribution for choosing samples works. Hence if we choose a function that is similar to random variable's actual probability distribution, we can significantly reduce variance.

Now coming to your question. We have seen that in order to use importance sampling we need to use function that resembles to the actual probability distribution used for sampling the spherical cap area. So if our function is $f=NDF(h) (n \cdot h)$, we need use a function that is similar to the actual probability distribution of this function to sample values from it in order to get an estimate with higher precision.

The probability distribution associated with $f$ then has two parameters, $\theta$ and $\phi$ due to using spherical coordinates.

You can read about the involved mathematics from:

Generally to importance sample a funtion, you calculate it using the inverse cdf method.

From when I remember, you basically take the integral/cdf of your function and normalize it. Then you know that your random number will be proportional to the the distribution, so you inverse it so that you are calculaiting x from f(x), where f(x) will be your random number.

Here it looks like they are inversing to generate n.h, which is the CosTheta. SinTheta is then just being calucated by the identity sqrt(1 - costheta^2).

Not the answer you're looking for? Browse other questions tagged pbr importance-sampling or ask your own question.