What is principal vanishing point in perspective projection?

I am unable to visualize what is principal vanishing point w.r.t to x axis ,y axis z axis do someone can post some simple diagram to understand what is it? Also I have question in my text book 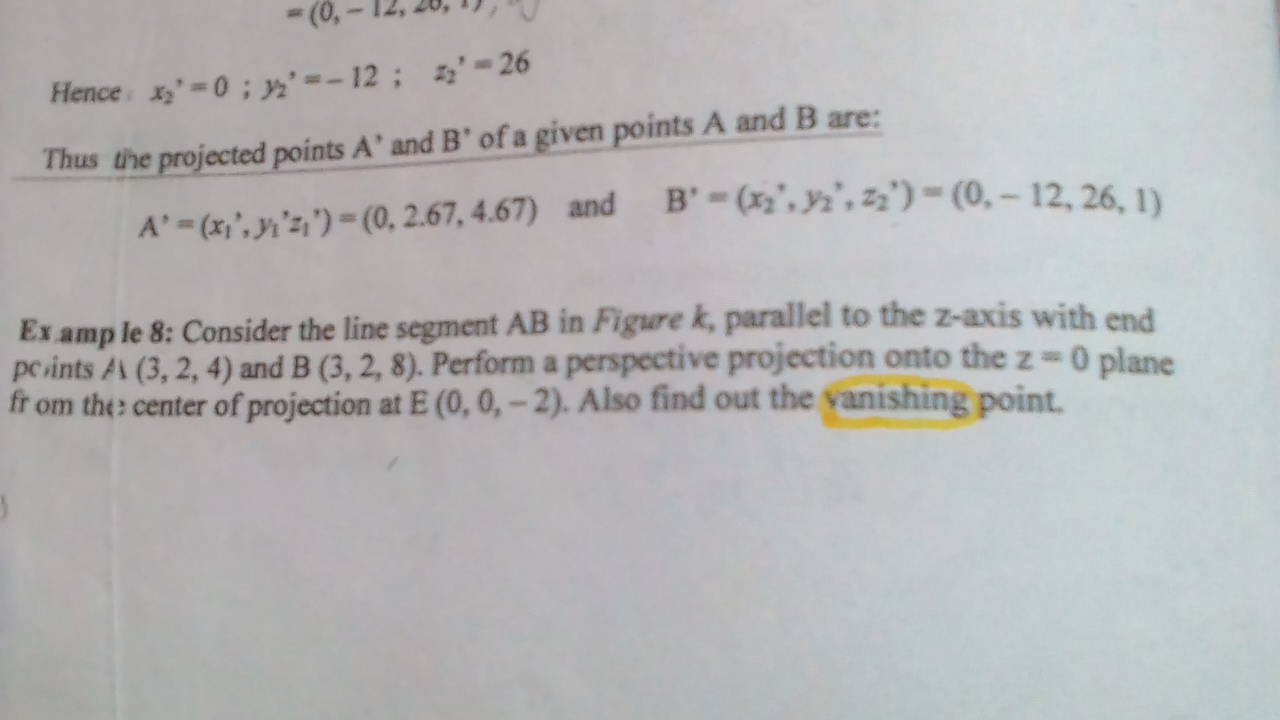 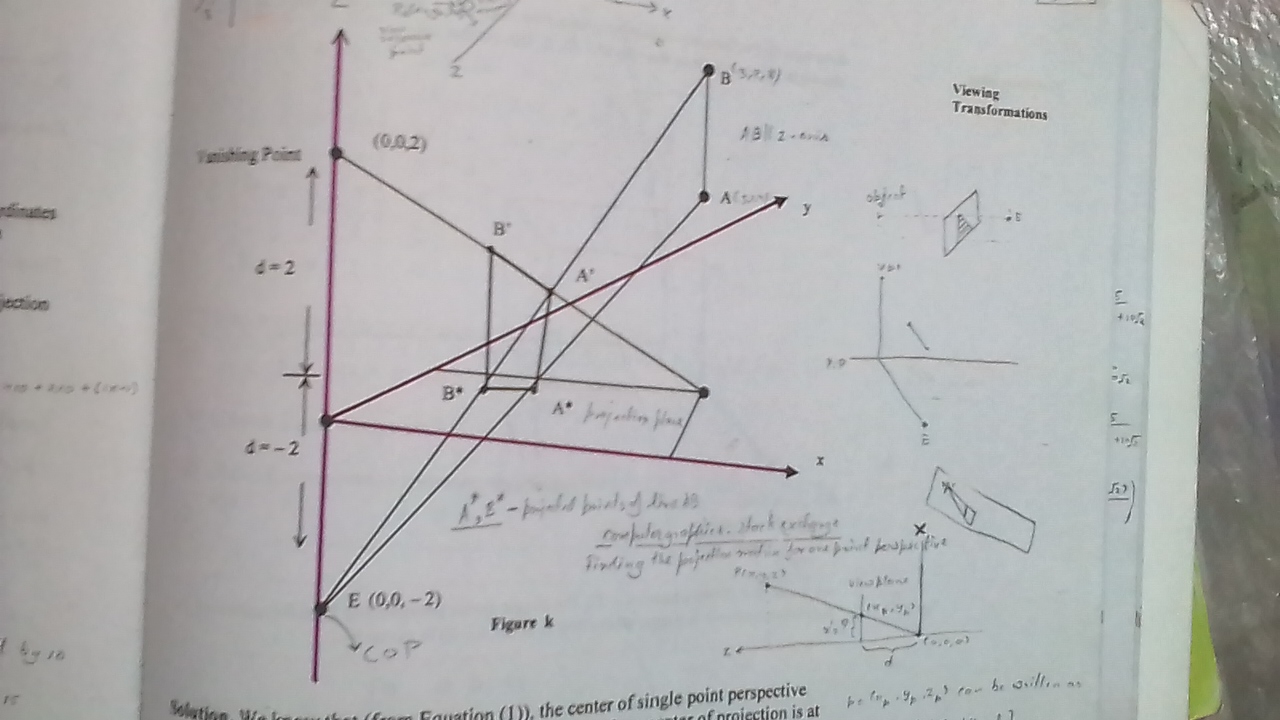 Now the question is how to calculate vanishing point and what is the line A' B ?Solution is also given which is (0,0,0) as vanishing point but I am unable to understand how do they get it , figure (k)shows it as (0,0,2) ,also what is d in the solution? 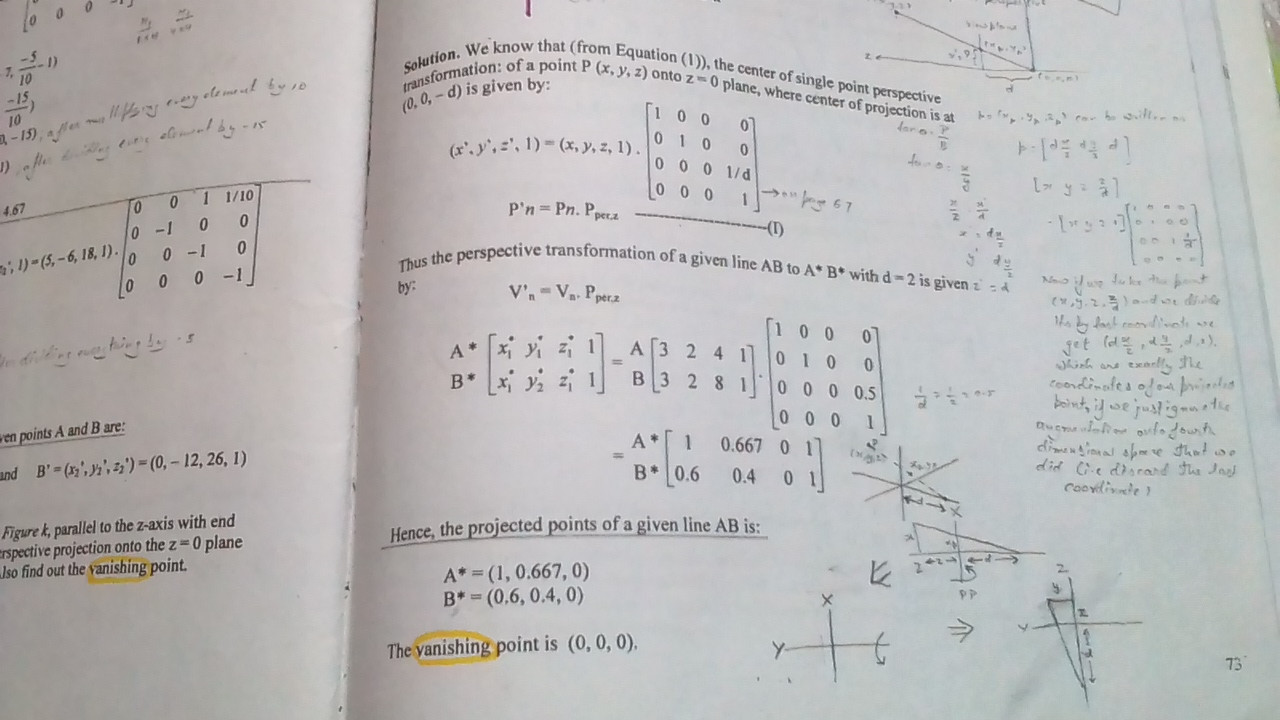 Basically whenever you project a set of parallel lines in 3D space on a 2D image plane, you'll see that these lines don't remain parallel in 2D space and tend to meet at a certain point which is the so called vanishing point. Picture a long railway, both the rail lines meet at the horizon.

Now one confusion arises that the question doesnt give you a set of parallel lines, But it doesn't matter as long as a single line segment is provided. All you need to do is just picture the line segment extending to infinity. So for example, picture the point $B$ at infinity and imagine drawing a line $BE$. The point at which this line intersects the image plane will be your vanishing point.

There is a simple pattern that applies to every case like this. Just shoot a ray in the direction of the vector $\vec{AB}$ from the point $E$. The point at which this ray intersects the image plane will be your vanishing point which as you can see is $(0,0,0)$.

Now imagine why this works. Picture the point $B$ extending up, and at each instance start drawing segments $BE$. You'll see that this line segment is moving towards the $Z$ axis. So if you are projecting a point $B$ at infinity then the projecting line or segment $BE$ gonna become parallel to the line $AB$. However, it can't go past the $Z$ axis, as this will start going in the opposite direction.

Not the answer you're looking for? Browse other questions tagged perspective or ask your own question.