I belive the reconstructed positions are correct. However, I still have the same problem as all the time. When I rotate around my single pointlight appears to be moving around also.

I finally solved this! It was annoying, but I did learn alot on the way.

I am trying to recreate viewspace positions from only a stored depth value, and then calculate the light in viewspace.

In the first pass I store the Normals and the normalized depth in viewspace. In the second pass I try to build reconstruct the position in viewspace.

I belive something is going wrong in the reconstruction, but I can't see what, or if it something else. I did try to reconstruct the position in different ways, always with the same not good result.

The light initially looks fine, but when I start moving around the light seems to be moving around. When I go futher away, things get less lit. When rotating the light also rotates. Note: When I render out the actual depth values, it looks fine, so think the depth is fine.

What could I be doing wrong?

Belove is code for the fragment & vertex shader, first and second pass.

Second pass (off rendering to screen):

for the normals, they looks correct, always pointing toward the camera. (also I can add, if I do the light in the first pass (not reconstructed depth), then the light is 100% fine). 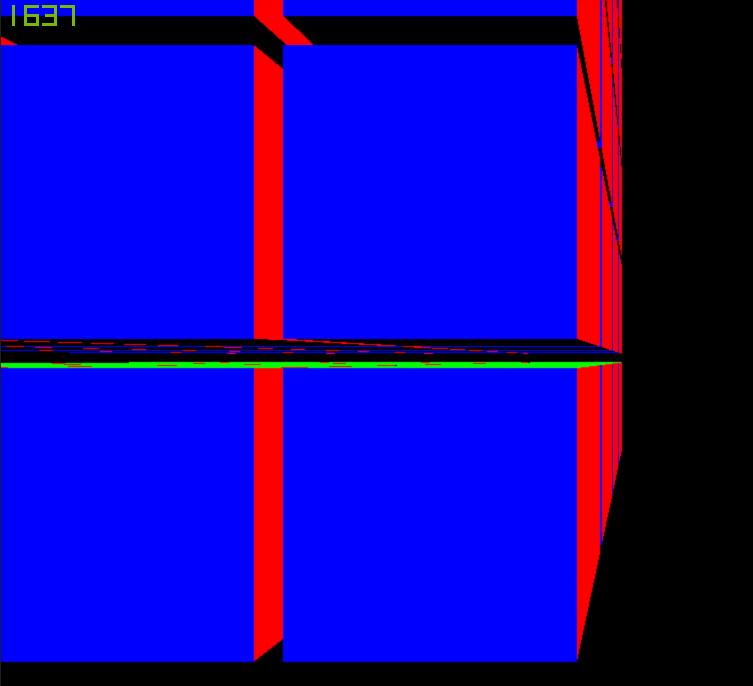 If we look at the light, initially it looks good. I positioned the light so It should shade as seen. But it changes and becomes wrong when I rote the camera. Also the intensity changes when I go further/closer with the camera. 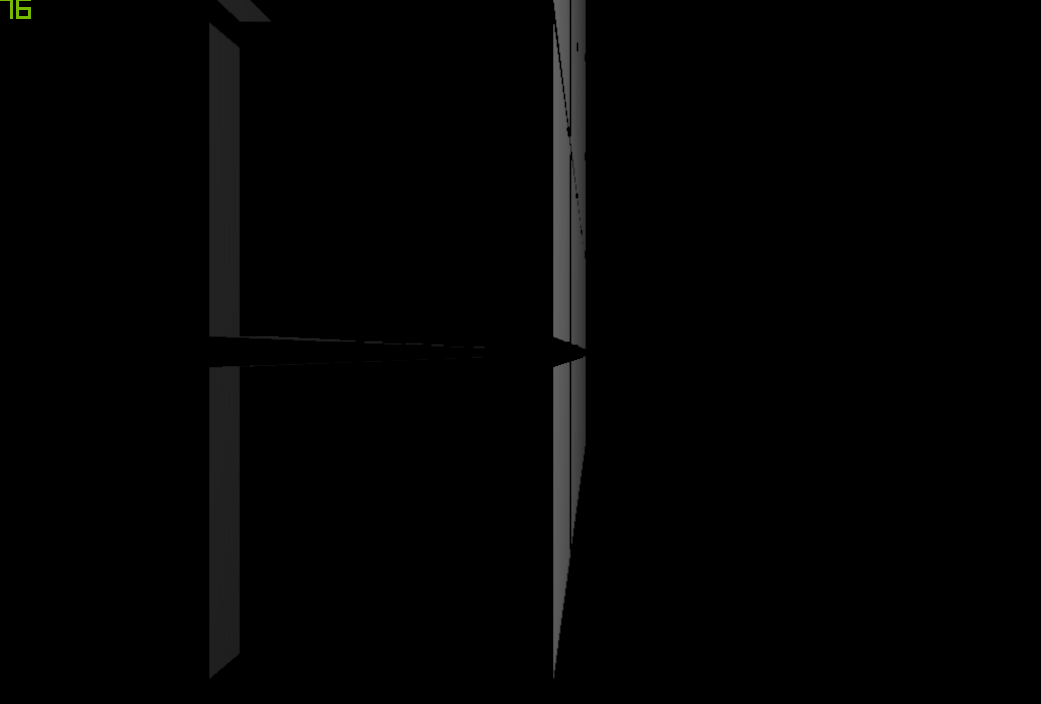 If we slightly rotate left for example, then the light follows (I want it in position!): 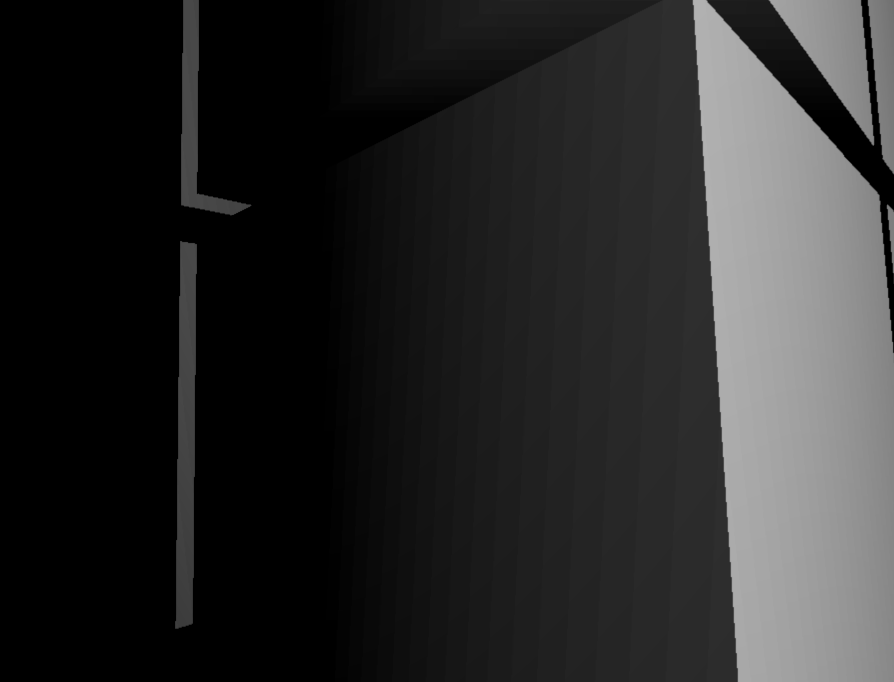 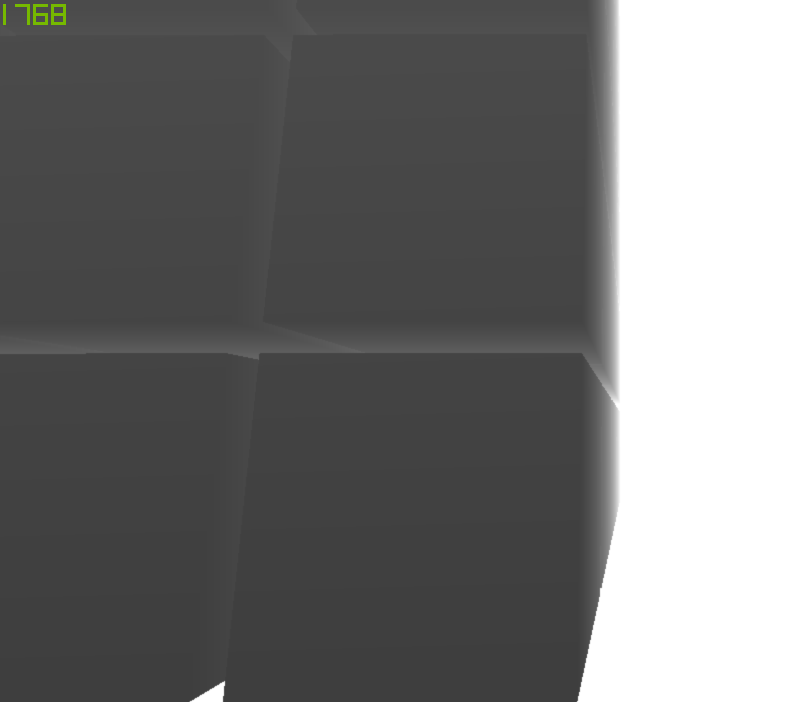 I have now reconstructed the depth in three different ways, all with the same result. I am starting to think There is something else I am doing wrong? Do I calculate the light wrong or something?

The three ways I have rebuilt (or tryed to) are:

These all options ends up the same. I have recalculated and went through the math over and over again, there is something else I am missing is my feeling.

was asked to upload image with the normals (R, G, B). When camera is abit rotated. 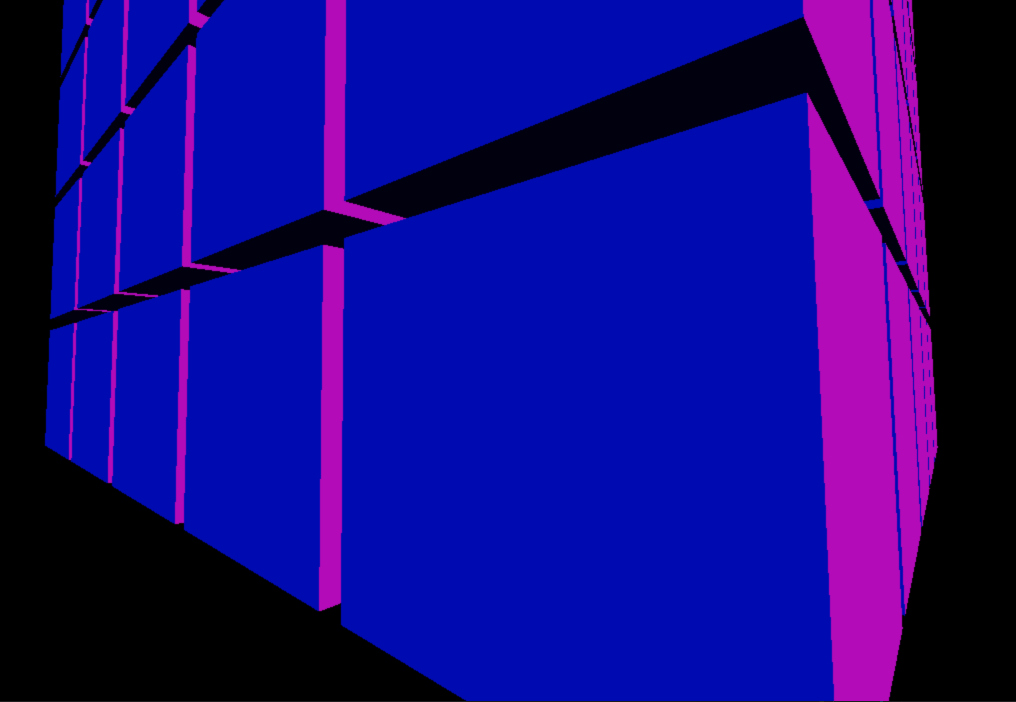 Adding some GIF animations that shows what is going on with the light. As you can see, if I dont rotate at all. just move around, then the light is as it should.

I did the correction Nathan Reed pointed out. Still with no better result. This is what it looks like when I render out fract(position). The boxes I render have a size 5.0 * 5.0 * 5.0 (actually each box is made up of 5x5x5 smaller boxes) 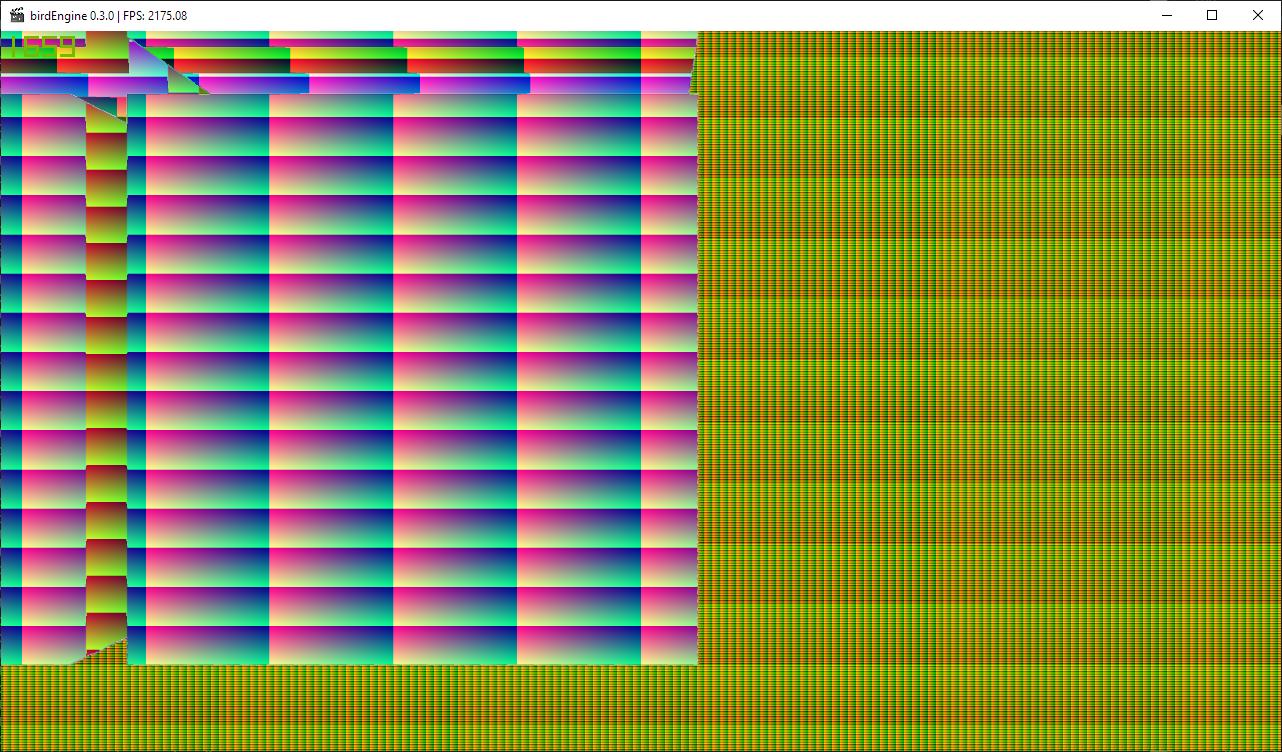 and abit more angled view at the boxes 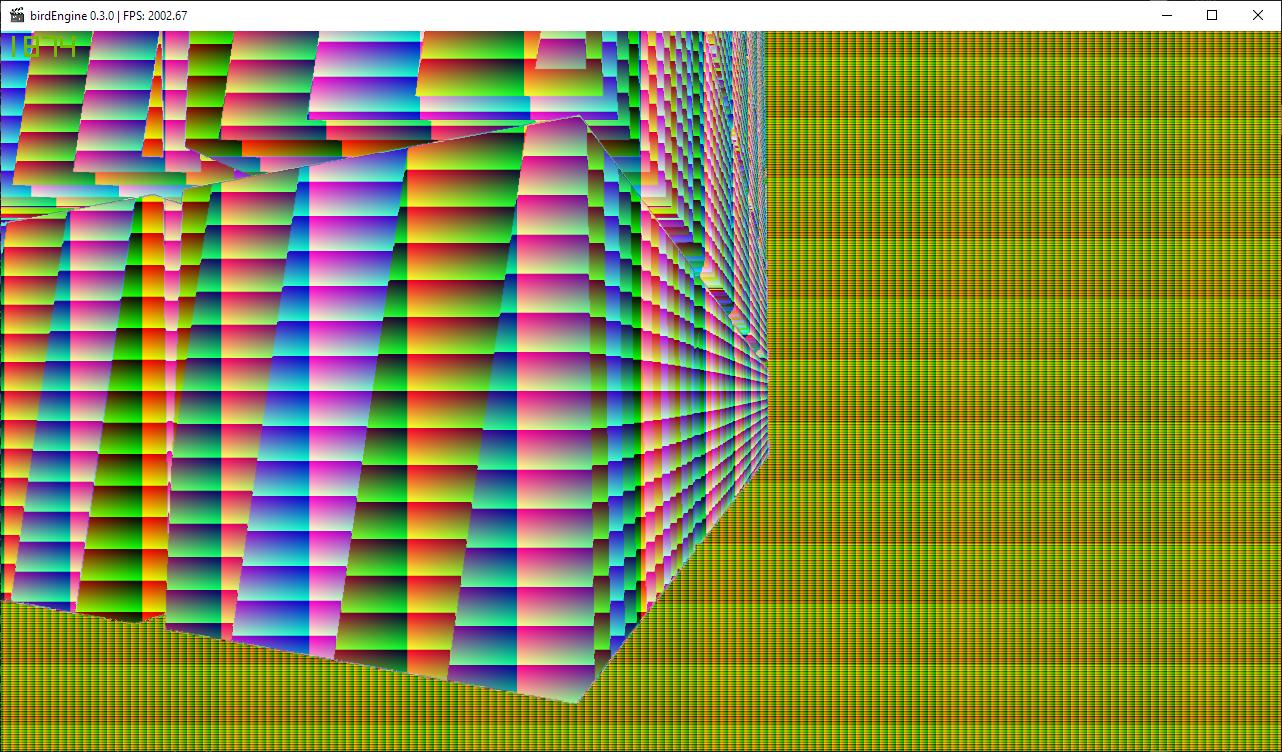 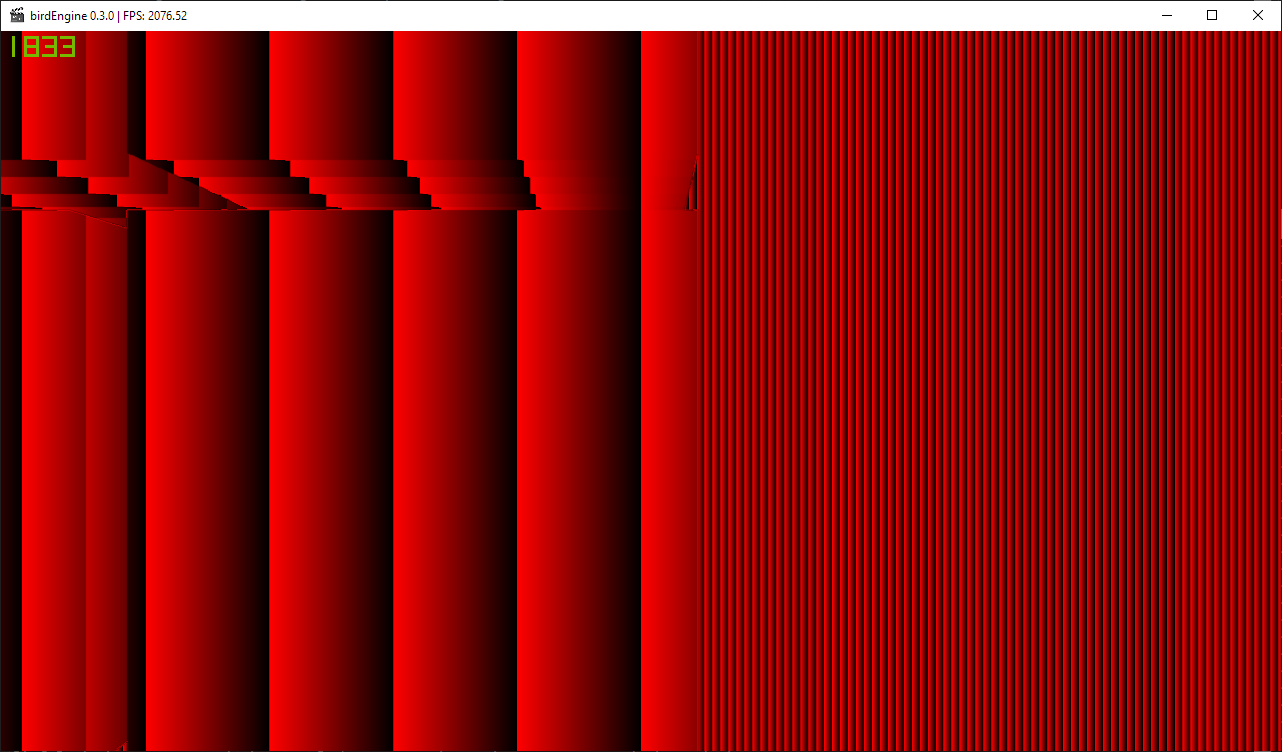 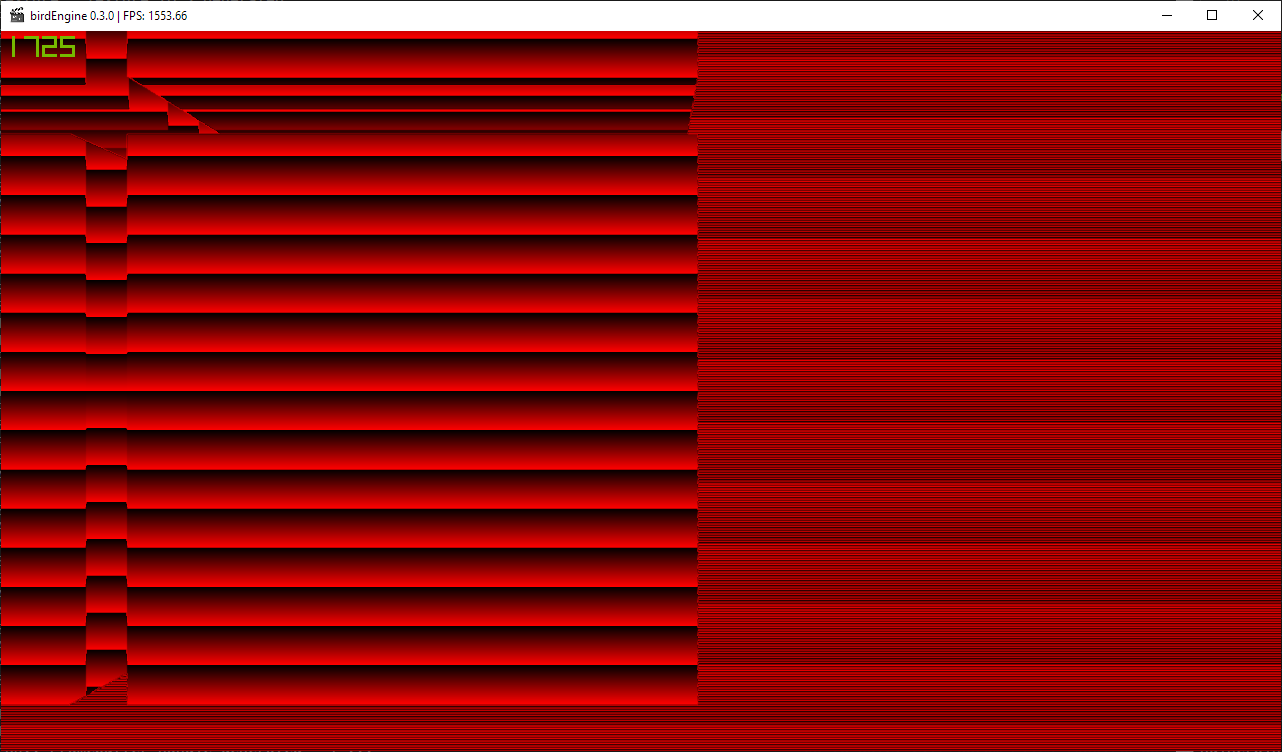 This is what it looks like when i render vec4( VertexPosition, 1.0 ); (the 2 triangles making up the fullscreen in the second pass) 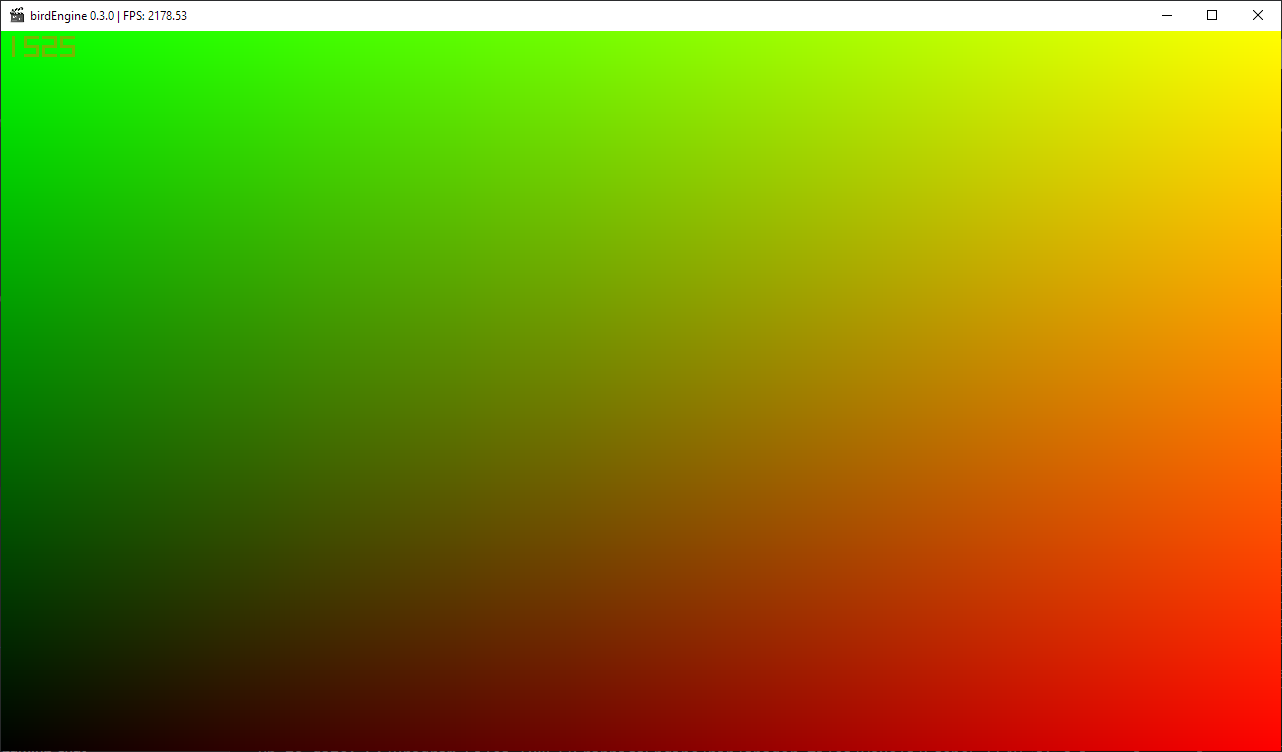 This is what is looks like if i render the fract(vPos) from the first pass.

Here I render just vPos from the first pass

This is about how it should look like. This is when I do the light calculation directly in the first pass. It is stationary, and perfect, as it should be, in this case. 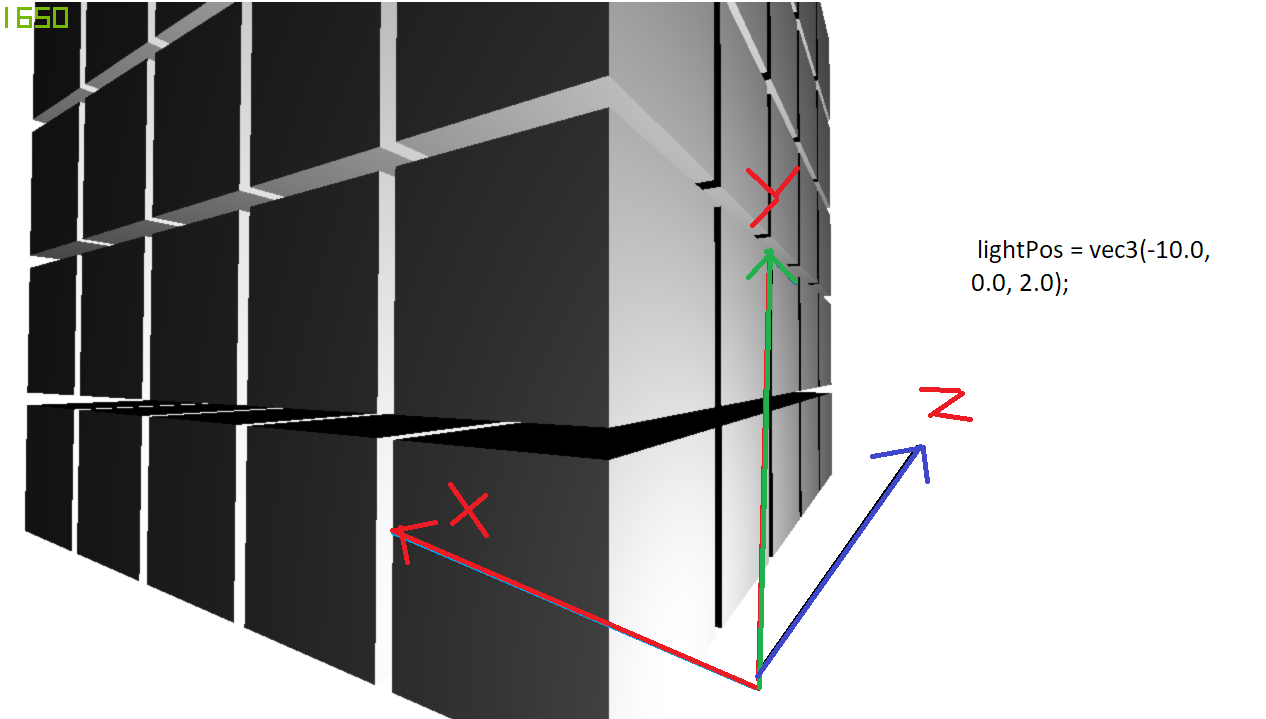 I just rendered the constructed positions, and noticed x,y-axies are flipped need to negate x,y when multiplying with depth, since depth is negate. Also we are saving the depth in viewspace, so use it straight for the z-component. That is correct, it can be noticed by the light not fading away when moving away futher with the position.z set to depth. Also, we are multiplying xy with depth since triangle similarity. To be more precise we should divide that with the nearplane, I will do that, but I am using nearplane = 1, so wont be any practical difference right now anyways.

So I did this:

Now the light calculated on the second pass looks very much correct, appart from rotating... The light don't even fade when going futher. As long as I dont rotate(!)

Is there something else obvious I am missing?

light, when moved, but not rotated at all: 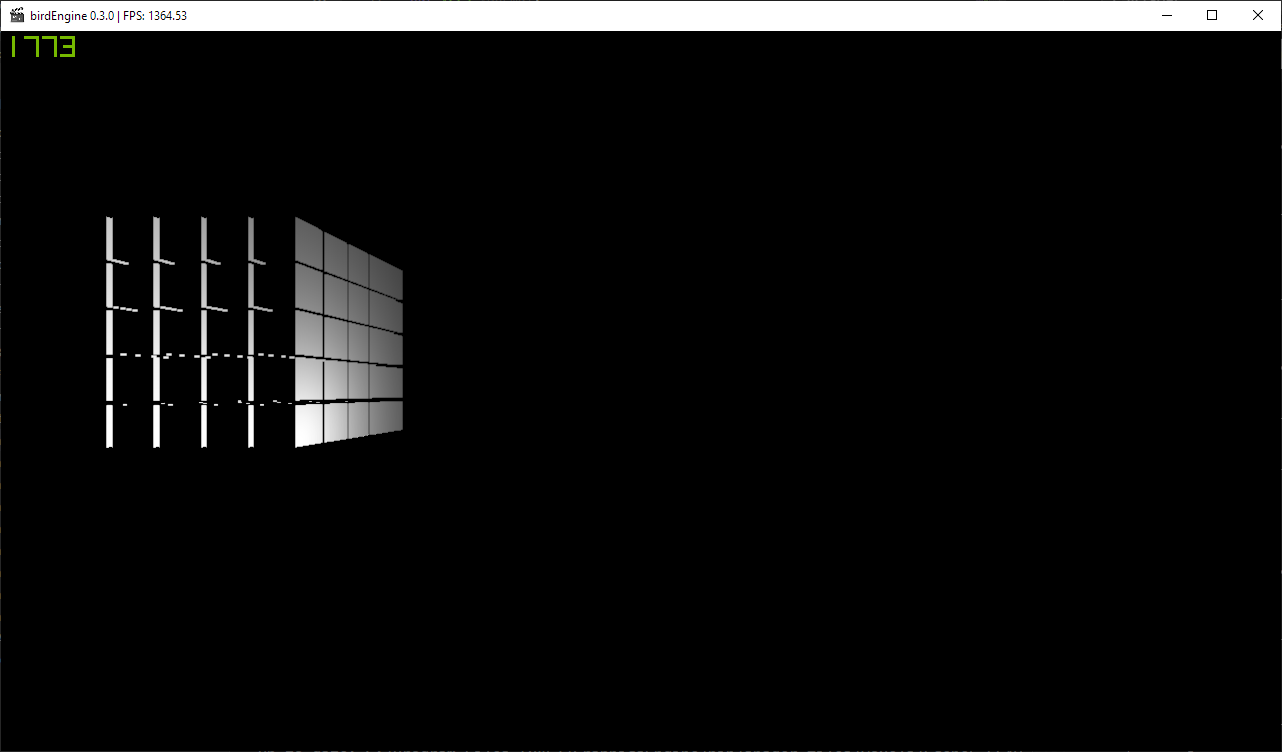 Reconstructed and Position looks the same when rendered. but when doing fract on the reconstructed position I still get this: 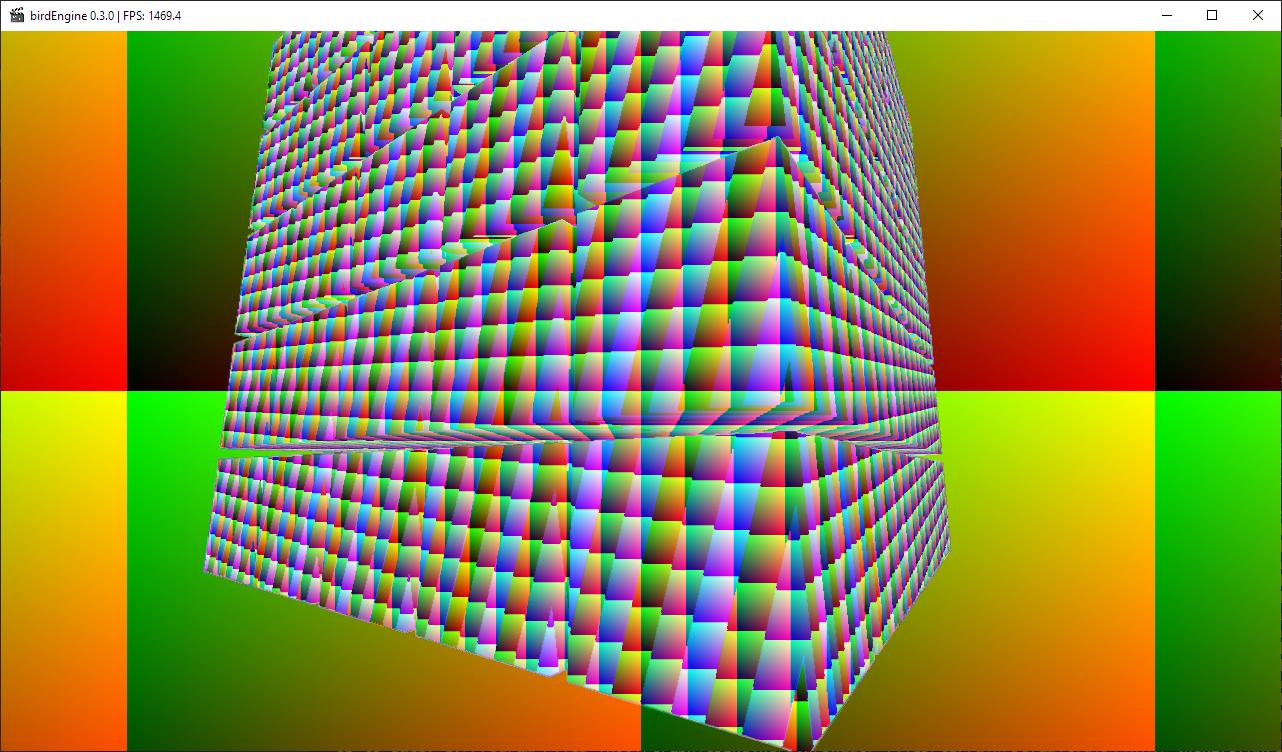 Still not giving up, learning alot, but getting abit crazy at this problem. So now when I look at the reconstructed using fract(position). This below is what I get (right side is the fract part, left side is just the scene with diffuse point light moving around wrongly).

the position seems to be correct now when I look at it, as each texture on left side is one unit. and that is matching the the reconstructed position: 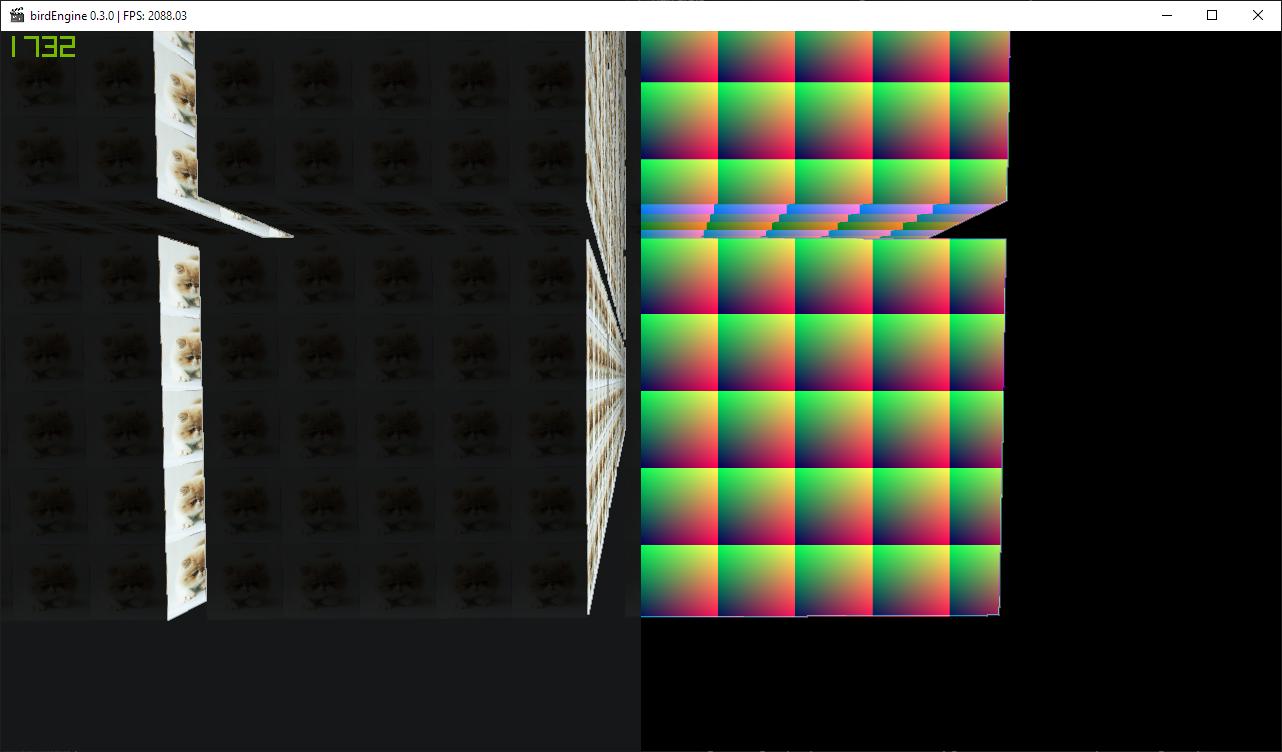 However, as Nathan pointed out. I can look at fract(vPos) in the fist pass, that is how the reconstructed position also should look.

And still, this is how it looks like, from the first pass: 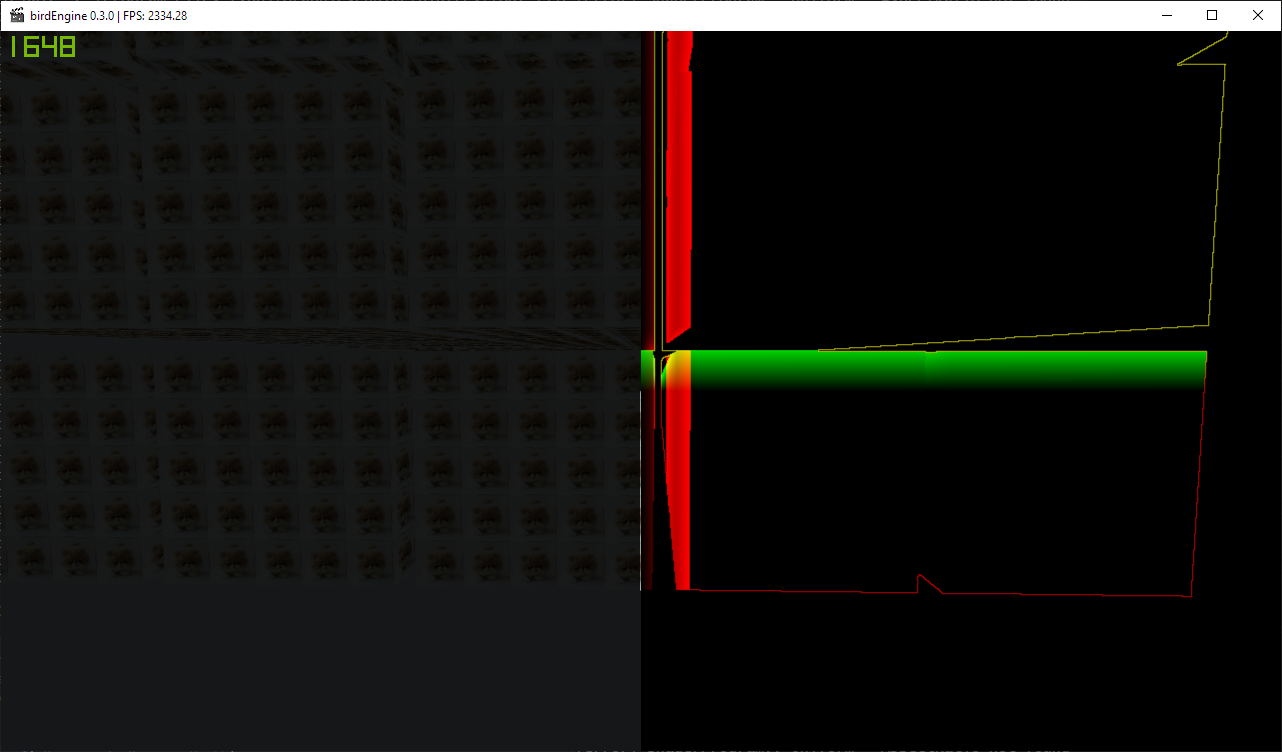 That one makes less sence for me, should I not be able to see the fractions in the same way there? For me the reconstructed one makes more sence

I did fract directly in the first pass, to see how it looks like. I did not think about the values getting changed when saved to texture, so I was not looking at what I though before.

Anyways, it looks exactly the same as the reconstructed values, see below! 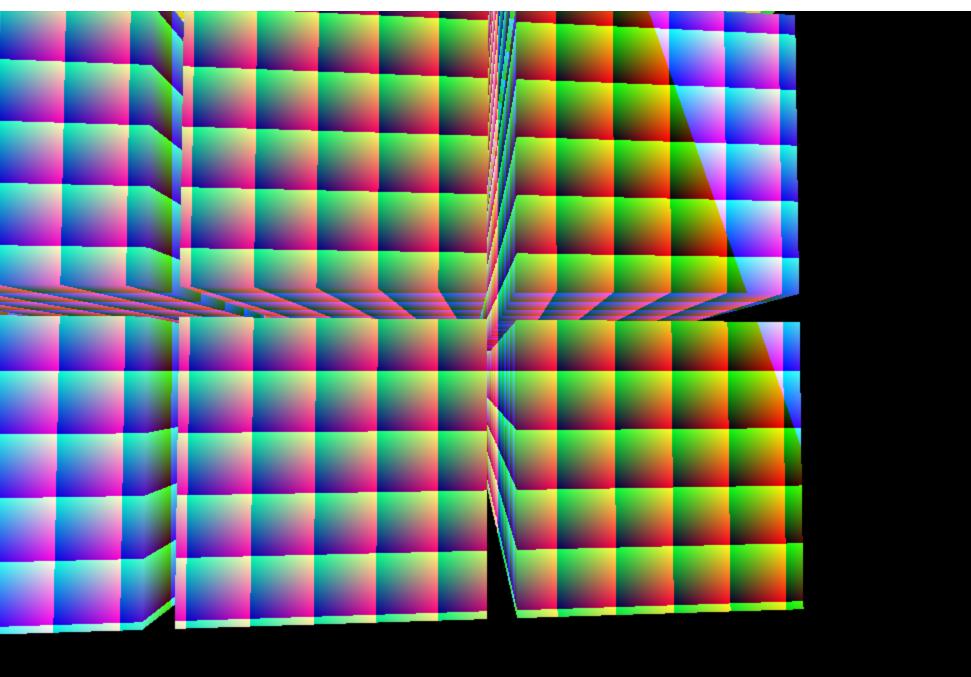 So I belive now I have the right constructed depth. But however, still having the same issues as always, light seems to rotate around when I am moving.

You're not correctly inverting the mapping you used to store the depth value. When storing it you use:

Then you reconstruct it as:

but this misses both the offset by NearPlane, and the negative sign to flip the Z axis (since it points out of the screen in right-handed view space, but you want to store positive values). You're not getting back the same view space you started from—the space that your normals and light are in.

The correct inversion should be:

The depth values will be negative; this is correct since as mentioned Z points out of the screen in right-handed view space, so the Z values of everything you can see will be below zero. You'll have to tweak some other bits of your code to match—for instance, get rid of the negative sign when you calculate the position xy, and move the light to a negative Z value. It's this attempting to work in a space where depths are positive, while using normals in a space where depth is negative, that is most likely causing the lighting issues when rotating.

You could also precalculate those 1/ProjectionMatrix values in a separate uniform value if you liked.

Finally, I'll just note that you don't need to store a depth value explicitly in a channel of a framebuffer somewhere. It's possible to bind the actual depth buffer as a texture and read that. It's stored using a nonlinear mapping so it takes a bit more code to recover a linear depth value from it, but this ends up being the best way as you get the full precision of the hardware depth buffer, and it doesn't consume a framebuffer channel that you could use for something else. For more information, see MJP's Position from Depth 3 post.

Ok. So Finally, I have solved the problem. This problem I been working on for a couple of weeks. Had to go through several books in math, gamedev etc. Went through all my code, to see if I had something I did missunderstand.

Finally I found the problem! I was trying to store normals in the texture, with values between [-1, 1], I did not think about the values stored in the texture has to be [0, 1].

So I normalized them to [0, 1]. And then in the second pass I the normalize them back to [-1, 1], and finally, after many long nights of search, the problem has been found!

Hope this will help others also! And thanks everyone who had a look!

Not the answer you're looking for? Browse other questions tagged opengl shader glsl lighting or ask your own question.

3
Unable to pass custom Matrix4 to GLSL as a uniform
4
Strange behaviour in vertex shader with divisions
3
Phong shading in OpenGL: line of light from the center of the world
2
Different result with DSA (vertexArrayVertexBuffer, vertexArrayAttribBinding) than with glBufferData
3
Why are depth buffer values clamped to (0, 1)?
0
Why is precalculating a distortion different from calculating it in the shader?
4
Why is OpenGL recompiling my depth map vertex shader based on the GL state?
0
fastest way to "read only" from buffer