Two questions: How to find the last 3 points for Milne's Predictor? And methods for smoothing iso-line contour?

I am trying to implement Milne's predictor method to solve the eq. for iso-lux contours according to this paper by Arvo. Here is the predictor:

From the paper: "It is a multistep method that predicts the new point by extrapolating from the three most recent gradients and function values using a parabola. where gk denotes the gradient at the point rk, and h is the step size".

For a y=f(x) function, with step size h, I understand how to move the initial point to get the last three points. Moving along x axis: 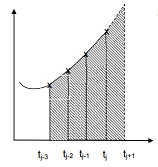 however I cannot work it out what direction to move the initial point(e.g. the red dot) if the curve is defined on the xy plane, like this: 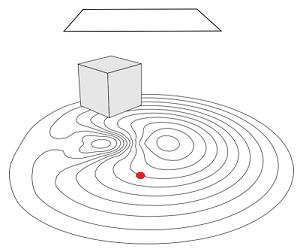 Are the last three points on the iso-line?

My other question regards the contouring algorithm,

I know the marching sq method to draw the iso-line contours. What are the methods for smoothing/refining the contour, specifically by using the function gradient?

Browse other questions tagged isoline contour gradient or ask your own question.